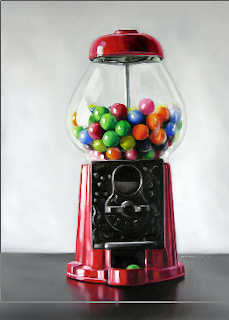 In 1872 in America a man called Adam Smith worked in a factory and found a piece of chicle.For fun he popped it in his mouth and chewed on it until he said “it’s still whole”.

Adam thought of a great idea to heat up the chicle and add mint flavouring.He wanted to make money out of it.But shop owners refused to sell it.

So the tutti fruity company excepted it and sold it in slot machines. People could now buy it at railway stations.
Posted by Wyatt P at 10:04 AM