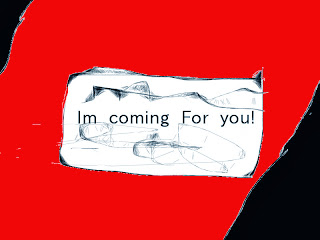 “Woo hoo” shouted Shane as he ran alongside the beach. “Don’t be scared” Shane said to Amy. Shane was a teenage boy who loved the outdoors, he would skate, surf and all of that wacky stuff teenagers like. But Amy was different then others. She was scared of mostly everything. But had a weird phobia about the woods. Shane wanted to go to the woods for ages. That was the only place that he hadn’t been So he tricked Amy into going with him to keep him company.

“Amy do you want to go on a trip somewhere?” “I guess so, asuming it’s summer” Amy fell into shanes trap. So they set off into the woods. “Where are we going exactly?” Amy asked? “ You’ll see”. Shane murmered under his breath. Shane had rented a little Home and wanted to use it for a while now. It was in the woods as well.

“This is the WOODS!” shouted Amy, “You know that I have a phobia about the woods!” Amy was furious at Shane. “Well it’s too late to turn back now!”

Riding along the road, with Amy still red as a tomatp, there was a huge log in the way of the road. Lightning must of hit the tree. Shane tried to move it. But it was too heavy, “Where’s my phone”? Shane asked Amy. “You must of left it at the house” Replyed Amy.  “ARHH” so they decided to walk to the nearest gas station to get help.

They stumbled upon a little cabin. Shane thought that someone was bound to be in there. There was, but they were also in to find something else

Knocking on the door of this spooky cabin, the door was left unlocked, so they waltzed right in there and there was food on the table and the television was on. “It’s like, someone knows we are here.” The door shut, ever so slightly. And when that happened, the T.V turned off and the curtains closed. In a second. A whisper came from the bedroom.

The door creaked open and there was a dying body on the carpet. “Rick” whispered the corpse. “Rick did it” it whispered again. “He’s in the bathroom” the corpse whispered for the last time.

So Shane rushed in the bathroom and found Rick, lying dead next to a pill bottle. It was pyscipted for Bill. “Must be the corpse in the bedroom. I ran into the bedroom and Bill was gone, So was Amy! The note was on the bed, it said “You’re NEXT”